Based from the Philippine Statistics Authority data for the year 2000 to 2015, Nueva Vizcaya ranked no. 3 in terms of growth rate, Quirino being the first followed by Isabela. It is slightly higher than the region’s figure by 0.03% and lower by 0.46% compared to the entire Philippines, as shown in Table. As of the latest census, the province with the highest population is Isabela which almost constituted 50% of the the total population in the region. Second and third most populated provinces are Cagayan and Nueva Vizcaya, respectively. In terms of the estimated land area, NV reported to have 4,427.248 square kilometers which translated to a population density of 94 persons per square kilometer. Note that the stated land area is GIS generated.The province recorded a higher population density in comparison to Batanes and Quirino but lower than Cagayan and Isabela. 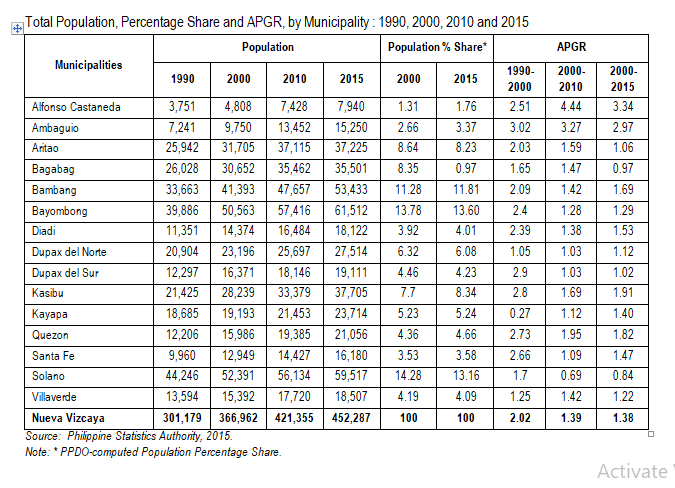 Shown on Table is the breakdown of population by municipalities in years 1990 to 2015 and the  Annual Population Growth Rates (APGR). Based on the growth rate from 2000 to 2015 computed at 1.38, the top 3 fastest growing municipalities in terms of population as indicated in the same table are Alfonso Castañeda, Ambaguio and Kasibu with 3.34%, 2.97% and 1.91%, respectively. In contrary, Solano and Bagabag are the slowest growing towns with less than 1% APGR.

4.2 Social Services And Status Of Well-being 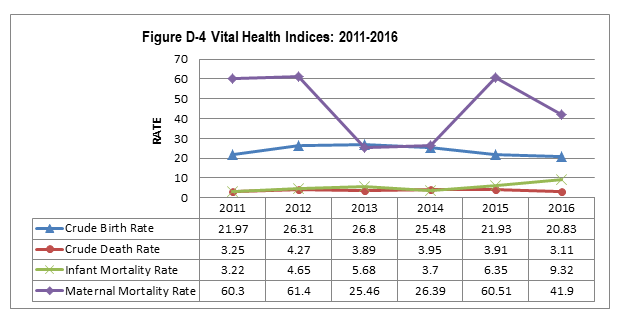 Crude Birth Rate (CBR) refers the number of live births occurring among the population of a given area during a year per 1,000 population, estimated at midyear. CBR of the province continuously increased from 2011-2013 but dropped on the succeeding years.

Crude Death Rate (CDR) on the other hand refers to the number of deaths per 1,000 population, also estimated at midyear. CDR for the years 2011-2015 followed a fluctuating pattern and eventually declined in 2016.

Infant Mortality Rate (IMR) pertains to the number of deaths per 1,000 live births of children under one year of age. The lowest IMR was recorded in year 2011 with 3.22 while the highest was 9.32 in 2016. Furthemore, pattern was increasing except for 2014 which dropped to 3.7 from 5.68 in the previous year.

Maternal Mortality Rate or the number of maternal deaths per 100 thousand population for the first 4 years showed a fluctuating rate then continually increased in 2015 and dropped in 2016.

Cardiovascular Diseases remained as the lead cause of mortality from 2012-2015, as well as Home Parenteral Nutrition (HPN) and Myocardial Infarction. Similarly, CAD was one of the top causes but only for the first 3 years. Generally, pneumonia in all forms ranked as the second followed by all forms of cancer. Consistent at top leading causes are Pneumonia, Cancer, and accidents in all forms.