As of 2017, 65.76% of the total potential irrigable area is already provided with irrigation services through out the province. Solano registered the highest percentage with 88.48% while the town of Ambaguio had the lowest with only 29.66%. 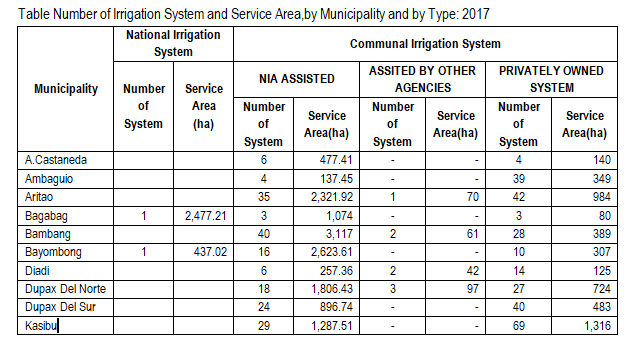 As presented in, 5 mini-hydros were constructed in the municipalities of Alfonso Castañeda, Bambang, Bayombong and Solano to provide cheaper cost of power among the residents in the mentioned municipalities.

The total length of roads combined national, provincial ,municipal and barangay roads added up to about 1,058.9235 kilometers where the provincial roads comprised the 44.69% , 33.86% registered national roads, 15.8% barangay roads and 5.83% municipal roads. For the national down to the municipal roads, mostly are paved. On the other hand, about 49% of the barangay roads are made up of gravel, 43.62% of concrete/asphalt and 10.24% of earth. In totality, the length of concrete/asphalt/tirepath roads  is longer in comparison to gravel and earth roads with only 35.01% and 5.11%, respectively of the total length of roads in the province.

As of 2017, there are 3 Level III-type water systems operating in the municipalities of Solano and Bayombong. Solano Water System or the so-called SNV reported the most number of consumers with a total of 3025, 608 more than that of the Provincial Waterworks System (PWWS) and 1370 higher than Bayombong Waterworks System’s figure. PWWS serves the households from both towns of Bayombong and Solano while BAWASA and SNV provides water services to Bayombong and Solano, respectively.