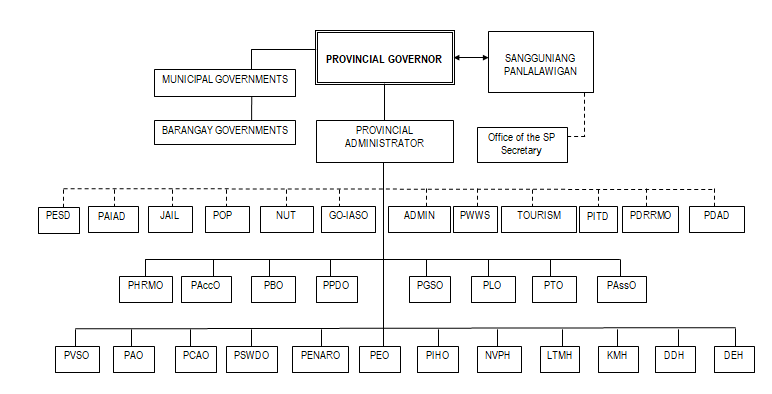 As of 2017, Seventeen (17) departments, 12 divisions(under the Governor’s Office) and five(5) hospitals are created in the Provincial Local Government Unit of Nueva Vizcaya. Included in the 34 offices are the newly created divisions and newly changed office names. Divisions under the Governor’s Office are the following:  Administrative, IT (PITD), Tourism (PTDPD), Jail, PWWS, Nutrition, Population, PAIAD, IASO, PDRRMO (a newly created division in 2014), PESD, and PDAD (recently created).  The Lower Magat Eco-Tourism Park Management is a project lodged at the Parks Administration and Development Division (PDAD). By virtue of SP Ordinance 2017-133  passed by the SP in April 10, 2017, six(6) names of  offices were changed. The new names include Provincial Integrated Health Office (PIHO), Provincial Agricultural Office (PAO), Provincial Veterinary Services Office (PVSO), Provincial Treasury (PT), Provincial Assessment Office (PAssO), & Provincial Environment & Natural Resources Office (PENARO). Table displays the number of employees by status of employment and by office. The top 3 offices with the most number of employees combined permanent, casuals and contract of service are PEO, NVPH and PGSO with 380, 372 and 198, respectively. In contrary, the top 3 lowest are offices under the Office of the Governor which includes IASO, Population and Nutrition with only 14 in total. 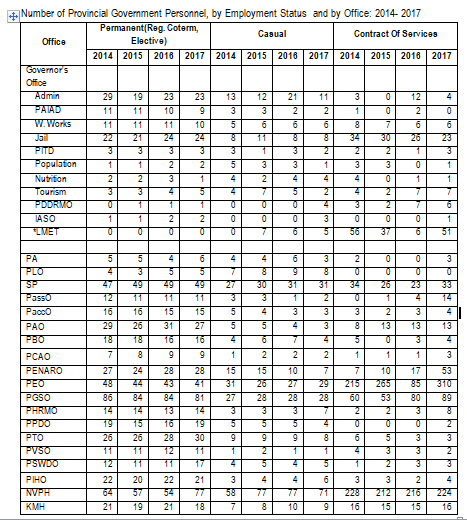 A.      COLLECTION BY REVENUE SOURCE

A 6.71%-increase on the total collection of the province was computed from year 2016 to 2017 which resulted from the growing share on Business Tax, PAGCOR/PCSO and IRA. Refer to Table. Also, there was no share on subsidy income from the national government and tobacco excise tax in year 2017. 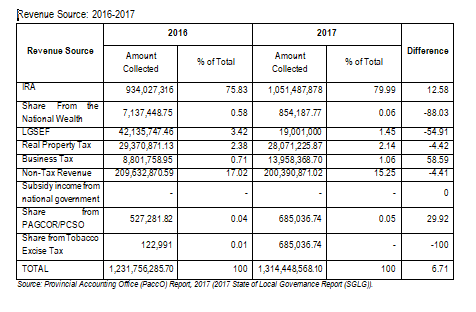 As exhibited in Figure, the total local income sources followed an increasing-decreasing pattern in the span of 4 years. The total amount in 2016 was the highest figure recorded at about  240M which rose by 40.33% from the previous year which was the lowest. On the same period, the Non-Tax Revenues consistently constituted the highest percentage share at an average of 72% while RPT(Basic & SEF) was at 24% followed by Business Tax at 4%. 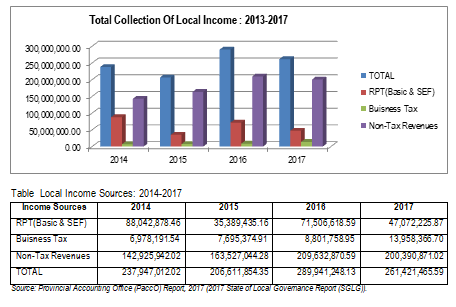